“…one of the worst cybersecurity disasters ever to hit a social media company.”  CNN.

On July 15, 2020, an unidentified group of hackers gained access to some of Twitter’s internal admin tools and through them, to the Twitter accounts of an impressive number of high-profile users. According to Twitter, the security breach translated to full access to a small “subset” of user accounts.

At a closer look, the scope of the attack turned out to be worse than it had been initially thought. The hack affected more than 130 verified Twitter accounts. In damage control-mode, Twitter quickly locked the affected accounts, denying them the ability to post.

While the “party” lasted, the hackers posted messages asking for bitcoin donations and promising to send back double the amount of bitcoin received. This MO is hardly a new one. YouTube accounts masquerading as the personal accounts of various celebrities have long beaten this scam into the dust.

That said, the scheme netted more than $125,000 in a few hours before Twitter moved to counter it. Around half of those funds allegedly originated from North American exchange accounts.

Given the scope of the hack and its potentially dire implications, the direct damage it caused was minute.

An unknown number of people fell for the outlandish premise, making around 420 transfers. Of these only 17 contained more than $1,000 worth of bitcoin.

Compared to the total number of followers commanded by the hacked accounts, around 374 million people, the numbers were indeed quite insignificant.

As mentioned, around half of those scammed are in the US. The other half of the scam victims are from Europe and Asia.

The proceeds of the heist amounted to 12.8 well-traceable bitcoins.

In the wake of the hack, Twitter CEO Jack Dorsey put forth a statement, apologizing and pledging to prevent such incidents in the future. Although its material implications were limited, the hack cast a light on issues that may shake the public’s trust in Twitter and social media in general.

The future of the company is in jeopardy. Several lawmakers have already requested it to fully cooperate with law enforcement and intelligence officials to get to the bottom of the hack. Given the current situation, the social media giant is indeed likely to lend its full support to the investigation.

Far above and beyond dealing Twitter a blow, the hack is a major national security problem. Some may say that it is not a problem for them since they eschew all forms of social media. The fallout of a social media hack aimed at a high-ranking official may, however, reach everyone.

A Bitcoiner is Probably behind the Hack

Despite the involvement of the FBI, no one knows anything concerning the identity of the hacker(s). At this point, we do not even know whether the hack was the work of a lone wolf or a nation-state.

That said, there are some leads well worth exploring. According to krebsonsecurity.com, the hack may have been the work of SIM swappers. Before the attack, members of the community discussed the sale of the ability to swap the email tied to any Twitter address. They also mentioned full Twitter account access.

The person(s) behind the attack knows bitcoin, so in that sense, we may be dealing with bitcoiners. They may not be cryptocurrency experts, however. They used a single wallet address for the hack, for all the funds that they managed to steal.

Thus far, they have not put any of the resulting bitcoins through a mixer. This way, they will likely not be able to touch the stolen funds, without giving up their identities.

Together with the Twitter accounts of the mentioned politicians and celebrities, the hackers hijacked several so-called “OG” accounts – accounts using short handles such as @6 and @B. One of these accounts started tweeting out screenshots of Twitter’s internal tools panel.

What the “Hack of the Decade” Means for Bitcoin

Bitcoin’s traditional detractors were quick to blame the cryptocurrency for the hack. Some may even have called for a legal ban on cryptocurrencies. For the most part, however, lawmakers directed their ire at Twitter and not the king of the crypto sphere.

According to crypto proponents, far from having compromised bitcoin, the attack highlighted the vulnerability of systems with centralized points of failure.

According to Kristin Smith of the Blockchain Association, lawmakers’ response to the incident has been positive from the perspective of bitcoin.

Price-wise, the top cryptocurrency took the news of the hack in stride. It did register a two percent drop at one point, but it has since recovered and has resumed its sideways evolution.

According to traders such as Diginex’s Matt Blom, the hack was a no-event for the bitcoin price. Others drew up detailed analyses of how the incident might impact the price of the top crypto.

The amount of bitcoin the perpetrators swiped was minute. Thus, it cannot possibly have any impact on the price of the asset, whether sold, hodled, given up, or buried.

The hacking generated a massive amount of press for bitcoin. Since there is no such thing as negative publicity, the king of crypto may even have benefited from the upheaval.

That said, despite the positive reaction on the part of the authorities, the hack may invite additional regulatory scrutiny of bitcoin. That would not bode well for the price.

The transparency of the bitcoin blockchain may aid investigators’ efforts to identify the perpetrators. This would be a net positive for bitcoin acceptance and adoption.

Besides raising mayhem and showcasing the vulnerability of centralized systems, the hacking incident has once again underlined the fact that bitcoin has value. Instead of starting a war, attempting to wreck the stock exchange or tampering with elections, these crooks wanted to get their hands on some shiny bitcoins…

What is certain at this point is that their efforts have been unable to awaken the price of BTC from its months-long slumber. Such long periods of price consolidation often give way to violent up- or downward price action. The short-term price outlook is bearish. Over the long run, however, the hands of the bitcoin bulls appear as solid as ever. 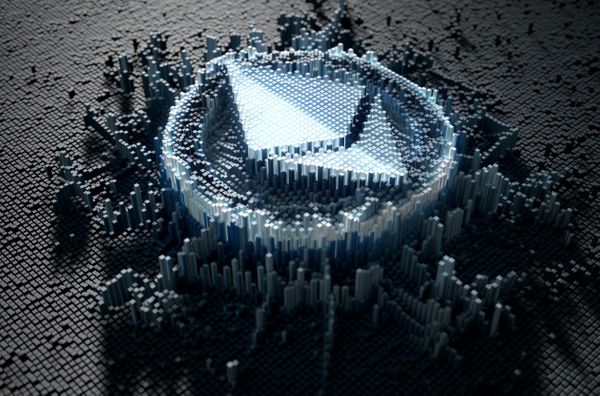 You may have heard of ETH 2.0, most likely hyped as a major cryptocurrency event and opportunity. What is ETH 2.0 though and is the hype surrounding it